The O.E. Sette award for general excellence is given annually by the Marine Fisheries Section of the American Fisheries Society. Oscar Elton Sette (1900-1972) was a pioneer in integrating fisheries, oceanography, and meteorology to understand the dynamic structure of the equatorial Pacific Ocean and the importance of upwelling and frontal structures on tuna, sardines and other species. The NOAA research ship Oscar Elton Sette (http://www.omao.noaa.gov/learn/marine-operations/ships/oscar-elton-sette) stationed in Honolulu, is named in his honor. 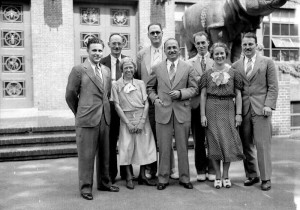 Sette was born on March 29, 1900. He was 18 when he began his scientific career, counting albacore on the docks of Monterey for William F. Thompson (1888-1965), then-director of the California State Fisheries Laboratory in San Pedro. After a stint in the U.S. Army during World War I, and a degree at Stanford, Sette went to work for Thompson. He incorporated increasing amount of statistical data into his research, leading to a position with the U.S. Bureau of Fisheries as Chief of the North Atlantic Fisheries Investigations in 1928. The Bureau transferred him back to California in 1937, to head a new sardine research program. His sardine program was adopted by the California Cooperative Oceanic Fisheries Investigation (CalCOFI).

Congress allocated funds in 1947 to build a new large laboratory in Honolulu. Sette was appointed director and made chief of the Pacific Oceanic Fishery Investigations (POFI) in 1949. With three new research vessels, Sette’s team produced a large number of publications on ocean conditions, including the influential “Progress in Pacific Oceanic Fishery Investigations, 1950-53.” Sette was one of the founding members of the American Institute of Fishery Research Biologists (http://www.aifrb.org/founding-fellow-oscar-elton-sette/). The Department of the Interior awarded him its highest service honor upon his retirement in 1961. He died in Los Altos, California, on July 25, 1972.

Sette is remembered for his remarkable scientific career, but also for his unassuming demeanor, enormous tact, and administrative ability. Friends described him as a life-long scholar, with an enthusiasm for teaching.

The basic criterion for identifying recipients of the award is sustained excellence in marine fishery biology through research, teaching, administration, or a combination of the three. MFS adopted the following guidelines:

All unsuccessful candidates from a given year’s consideration will automatically be eligible for reconsideration for the award in the subsequent year, and can be re-nominated in future years.

Submissions for Sette Award candidates will be accepted through May 31st of each year and should be made to:

Present and Former Recipients of the Oscar Elton Sette Award